Turning Our Education Crisis Into Opportunity: Lessons From High-Performing Nonprofits

The original article was published in Forbes on May 29, 2020 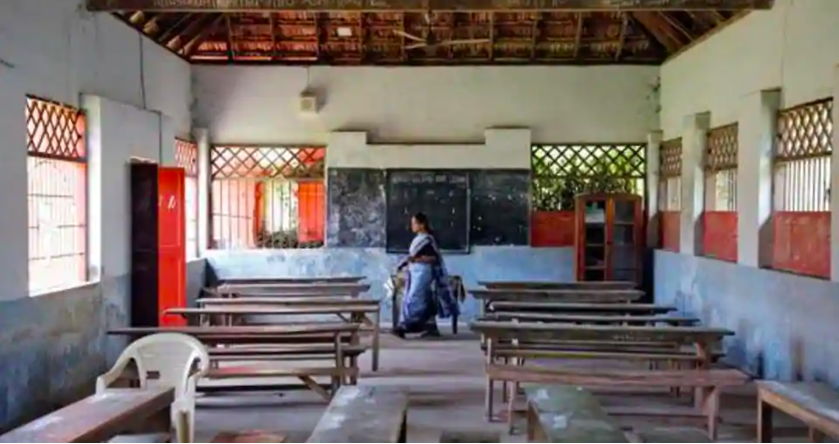 The COVID-19 pandemic has disrupted every semblance of normalcy in our lives—any parent currently attempting to ‘homeschool’ their children knows that the education system is no exception. The vital delivery of education to students has been upended across the world: in mid-April, 91 percent of all enrolled learners were out of school, according to UNESCO; ongoing efforts to mitigate the pandemic continued to keep more than 1.2 billion students in 168 countries home by mid-May.

Unable to provide in-person education, many schools have turned to rapidly-designed remote learning — “crisis learning,” in the words of a school superintendent in prosperous Silicon Valley, rather than “best practice.” But even such crisis learning is not an option for the 42 percent of children worldwide who can’t access the Internet at home or whose families lack computers, smartphones, and learning materials. Many children, even in ostensibly wealthy countries like the United States, rely on schools to provide them with nutritious meals; indeed, before the crisis, more than 300 million children worldwide were receiving meals at school, with many depending on school feeding programs as their main source of nutrition. Even worse, experts fear that a second shock — that of global economic recession — could compound and prolong the damage to education progress worldwide, and likewise accelerate hunger, malnutrition, and other social ills while causing many to put learning and life gains on hold. As the World Bank recently warned in The COVID-19 Pandemic: Shocks to Education and Policy Responses:

“Without major efforts to counter their impacts, the school-closings shock will lead to learning loss, increased dropouts, and higher inequality, and the economic shock will exacerbate the damage, by depressing education demand and supply as it harms households. Together, they will inflict long-run costs on human capital and welfare.”

Remote learning is not an option for 42 percent of children worldwide.

But, added the World Bank, “it is possible to counter those shocks, and to turn crisis into opportunity.” The effort to do so successfully — and find opportunities to improve education delivery and access in the long run — is already underway, spearheaded by high-performing social sector organizations that are working nimbly and with tenacity to address the unprecedented challenges of this moment. Two that stand out are Pratham and CAMFED. These extraordinary nonprofits have been recognized with numerous awards, including the Skoll Award for Social Entrepreneurship and the WISE Prize for Education.

Pratham — one of the largest non-governmental organizations in India — operates with the mission of “every child in school and learning well.” It has improved learning for over 75 million children in 21 of India’s 29 states since its founding in 1994 (and in recent years expanded its model to ten African countries). Pratham created “Teaching at the Right Level,” a pedagogical approach that groups learners by ability rather than age or grade, and this then became the basis of its renowned “Read India” program, which develops basic reading, writing, and numeracy skills in children ages 6 to 14 through fun, hands-on activities. So when India’s government announced the sudden lockdown of the entire country on March 21st, Pratham’s leaders found themselves scrambling to ensure that the children they served in 11,000 villages across the country would continue “learning well” — and faring well — even without school.

Recognizing the importance of finding an engaging yet accessible way to reach their students, Pratham describes their response as “have a little fun and do a little learning.” Initially, said Dharmenda Kumar, the State Head of Pratham in Uttarakhand, “Our team did not have an idea how to leave field work and do it over the phone.” But, they quickly adapted their model by reaching out to children, parents, and teachers using whatever technology was accessible. As Pratham CEO Dr. Rukmini Banerji explained in a World Bank panel discussion, each team member made about a hundred calls a day. They first contacted an “anchor” in each village and from there reached out to one person in each hamlet, then all the houses in a hamlet, asking people to deliver messages or share phones until, finally, they reached “the last child.” 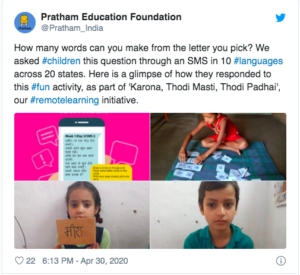 Once contact with each individual learner was established, team members sent content and activities through WhatsApp and asked children to reply. “WhatsApp is very effective,” said Dr. Banerji, with the caveat that not all kids have access to smart phones, but do have access to basic phones. “So we had to quickly turn everything into 167 characters of SMS in 20 different languages…sending little ideas and hoping for getting some feedback.” As the lockdown wore on, the number of responses, assignments, and videos submitted increased. “Parents are engaging with the children… and they are seeing the progress which they are unable to see during the [regular] school days,” said Oliver Balagadoss, Pratham’s State Head in Tamil Nadu. Dr. Banerji added that the crisis had actually served to increase personal connection through the use of two-way communication technology; as she noted, quoting a colleague, “We are much further away, but we are actually much closer.’”

Pratham found further hope in the increased collaboration it had observed among state governments and other entities who were scrambling to find ways to reach students (including through use of older technologies such as radio and television). “The crisis has created a lot of collaboration and we need to figure out how we are going to use it as we go on,” said Dr. Banerji. Pratham co-founder and president Madhav Chavan echoed this sentiment in an op-ed, noting:

“Whenever the schools reopen, the sheer relief of going back to schools may also mean there will be the desire to go back to business as usual. But experiences from the shutdown period could be used to modify the education system as we enter a new normal situation.”

Such modifications, he wrote, could include device libraries that would enable school-age children to better access online learning resources; recognizing that new technology can create “non-linear” paths of learning; creating strong, contextualized content in multiple Indian languages; and preparing for an increasingly urgent need for lifelong learning in a fast-changing economy. “Our experiences during lockdown are pointing us in the direction of necessary and possible changes,” Chavan concluded. “We should reflect on those and act.”

CAMFED (Campaign for Female Education) is an innovative international organization that seeks to tackle poverty and inequality by investing in girls and women in poor rural communities of sub-Saharan Africa. Its education programs have led to improved learning environments for more than five million children in Ghana, Malawi, Tanzania, Zambia, and Zimbabwe. So, as the pandemic shut down schools and forced tight restrictions on the movement of people, goods, and services, CAMFED jumped into action. “We know from experience that girls will be hardest hit,” CAMFED wrote in their COVID-19 Action Brief, Girls and Women at the Frontline of COVID-19. “They are the least likely to return to school and most vulnerable to drop out. They also face an increased risk of early marriage and adolescent pregnancy.” 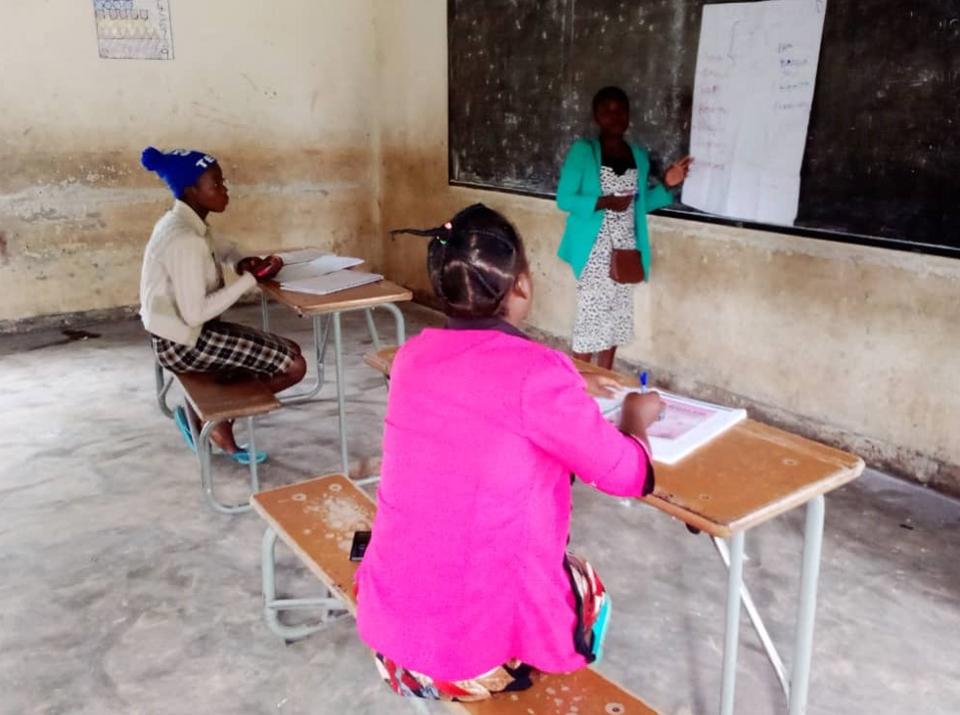 In mid-April, UNESCO reported that 259 million students were out of school in sub-Saharan Africa, with more than half of these likely to be girls. Even when the schools finally reopen, the economic setback that hit families will remain, and with it loss of income, hunger, and lack of financial and social support for children to return to school. As CAMFED notes:

“This puts pressure on girls, who often bear the brunt of household chores and caring responsibilities, to drop out, and to enter into early marriage. Girls also face higher risk of violence in the household. Research shows that, in crisis settings, girls’ fear of violence is not limited to external dangers, but also to gender-based violence within families.”

To mitigate the pandemic’s negative impact on the girls and women it supports, CAMFED leveraged its powerful alumni and partner network: 290,000 people on the ground who have the expertise and access to offer assistance. CAMFED volunteers are seeking to identify those most in need so as to disseminate food, soap, medicines, and sanitary pads to girls and their families. It has further sought to ensure that the 150,000 + members of the CAMFED Association (CAMA), which is the extraordinary network of young women leaders who were educated with CAMFED support (described in my previous article), are able to maintain access to mobile phones so they can disseminate factual information about the disease and dispel myths related to it. CAMFED is also training CAMA members to deliver a life skills curriculum and learning support via mobile devices in an effort to help build girls’ confidence, encourage them to prioritize education, and set goals for their future. And, it is offering financial support to CAMA members who run businesses so they can repay outstanding loans, access working capital, and refocus their businesses so as to best serve their own communities in this time of global crisis. Lucy Lake, CEO of CAMFED, reflected, “It is a daily inspiration to witness the tenacity of the young women in our network in responding to this crisis. Having completed their own education against all odds, they are stepping up in extraordinary ways to beat the odds for other young people affected by this pandemic.”

Over my 25 years of experience and extensive research into what drives excellence and high performance in the social sector, I have seen time and again that well-managed organizations — such as Pratham and CAMFED — tend to fare best in times of massive change and disruption. As Dr. Banerji put it, “In this crisis often the best characteristics of people and organizations come out.”