A Range of Emotions

With most schools being shut for 500 days, travelling to different states for field visits remained a distant reality for me. While all of us had constantly been in touch (more so than usual because of Zoom), there was eagerness and anticipation to meet friends from a different state in person, travel to program locations, interact with folks we were remotely in touch with or not in touch with at all and experience the great lush outdoors. However, the fears due to the pandemic had not abated – taking a flight, using public transportation, sitting next to unknown people, or sleeping in a new place. None the less, while taking precautions the best I could, I was mentally prepared to visit the field again! 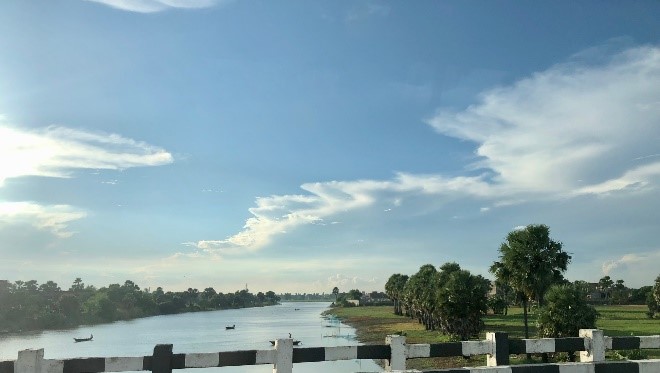 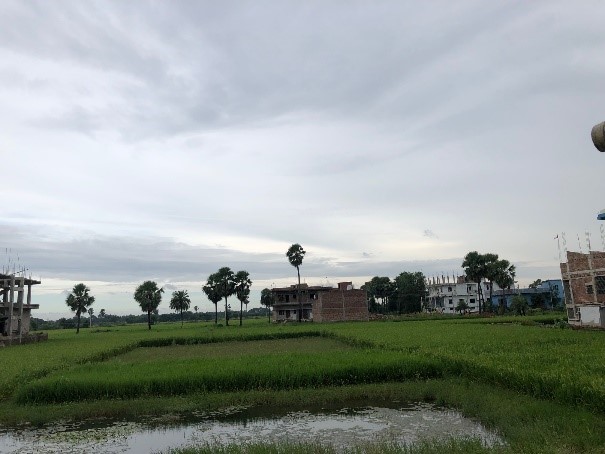 My field visit was to Patna and Nalanda in Bihar. A very familiar territory for me – from the people to the program, I thought I knew what to expect as I had done this trip many times before. However, this time it was different. This was not only because I hadn’t travelled in such a long time but because we had done and learnt so much in the last year and half remotely, I wanted to know how all of this was translating on the ground and how people were readjusting to normal life.
In a very short three days of field visits, meetings, observations, and discussions I was at times extremely proud and hopeful with what I saw and heard and at times confused and frustrated with the responses and the situation. Here I try to share some of my emotions as I return from the pavilion on to the pitch again:

Prestige – Be proud of what you we do! My trip started off by receiving an early morning call while I was going through security check at the airport that Rukmini Banerji (Pratham’s CEO) had won the prestigious Yidan Prize 2021 – the world’s highest education accolade! I had heard about the prize but didn’t really know the background or details. After hurriedly going through security check, I started reading up about the prize, past winners, and the person who the award was named after. After about 30 minutes of research, I met Rukmini, who on our first interaction after meeting in person after many months chose to comment on the openness and airiness of Delhi’s T3 international airport and was visibly happy to be travelling again! 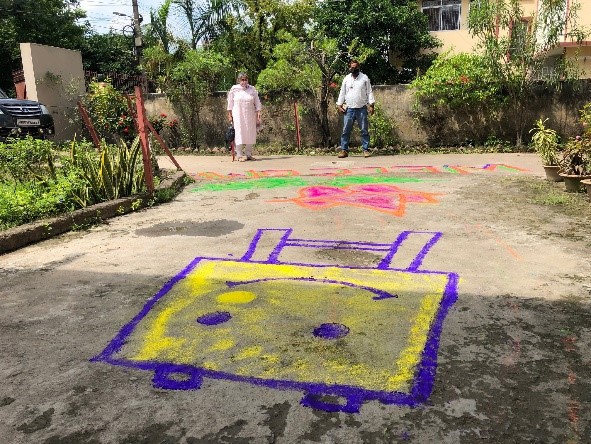 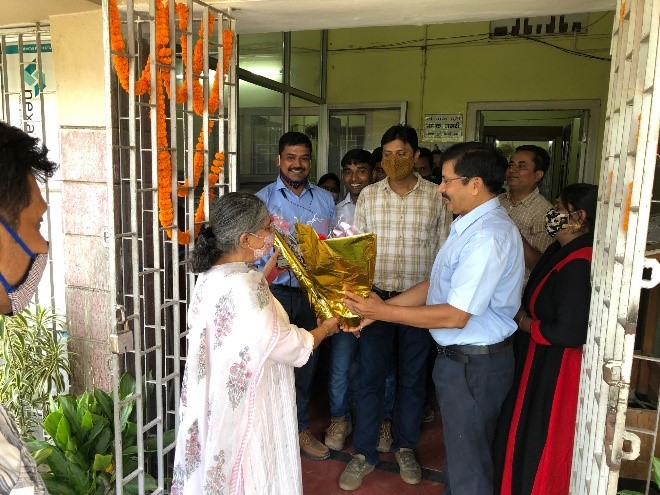 I was told to keep quiet about the prize and not mention it to her, because it hadn’t been announced officially yet and we would be mid-flight when it would. So, trying not to think about it (although it was on my mind continuously) our discussions continued ranging from her trip in the previous week to the excitement, and nervousness about travel and what we should focus on during this trip. During the flight I distracted myself by chatting about work, she also caught up on past Sunday newspaper readings and reviewed a presentation. All this while in my mind I was contemplating how and when I should congratulate her for the award. What would it feel like to win something like this? What would she do with the prize money?

What is the Hong Kong currency conversion rate? A long list of relevant and irrelevant questions kept popping up in my mind. We finally landed, I quickly turned on my phone and saw the flurry of messages on WhatsApp and now I knew it was public knowledge. I finally congratulated her! With a slight grin, she turned and said, “congratulation to all of us, this is a prize won by everyone working and associated with Pratham”.
My first day back in the field was a day of celebration. Rukmini’s phone buzzed endlessly, there were decorations and celebrations once we reached the Patna office, and you could see the pride in everyone’s wide smile (when masks were off!) From then on, Rukmini’s first response to whoever congratulated her – across Pratham teams and government officials, was always, this is ‘our prize and the recognition of the amazing work that all of us are a part of’. 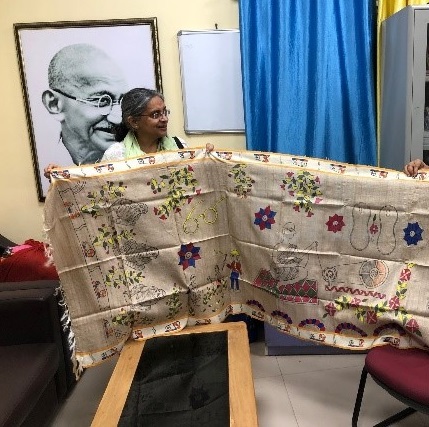 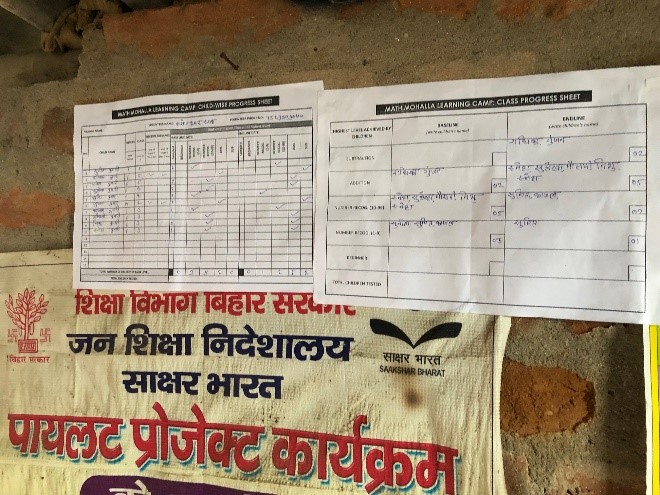 Hope – See it to believe it! More so in the last couple of months, Pratham teams have started visiting and working in person in the communities we have direct connections with. We’ve re-started learning camps through Mohalla classes run by volunteers and Shiksha Sevaks (specially appointed for vulnerable communities by Govt of Bihar). In Nalanda we were able to observe a Shiksha Sevak’s language learning class. Close to 20 children huddled up on the roof of Shishka Sevak-Saroj ji’s house situated at the entry of a very large village. Two weeks had passed since the camp had started, and children were studying in their level-wise groups – some were reading and writing full stories, other were working with alphabets and words. All happily dressed in uniform (even though it was a holiday in school!). The walls of the room on the roof were decorated not only with number, letter, fruit, and veggie charts but also with all the drawings made by the children. As a Measurement Associate, I was happy to see the Learning Progress Sheet (which has the baseline and endline assessment levels) of all the children from the previous math mohalla learning camp and summary Progress Chart neatly pasted on the wall for everyone to see.

Although we disturbed the regular activities of the day, we got to interact with all the children. When we asked what they missed most about schools – in a low tone everyone unanimously said ‘padhai (studying)’! Promptly, they could make out that we knew that wasn’t the case and so we asked again – a couple of children in a loud, happy tone said ‘Doston ke saath kehlna school mein (playing with friends in the open field of our school)’ and then in an even louder chorus everyone repeated the same! It was clear to us that although we saw constant smiles and high level of engagement, all children were not reading and writing at the same level, some had been able to continuously learn during school closures and for others the basic learning journey had just restarted after a prolonged gap. 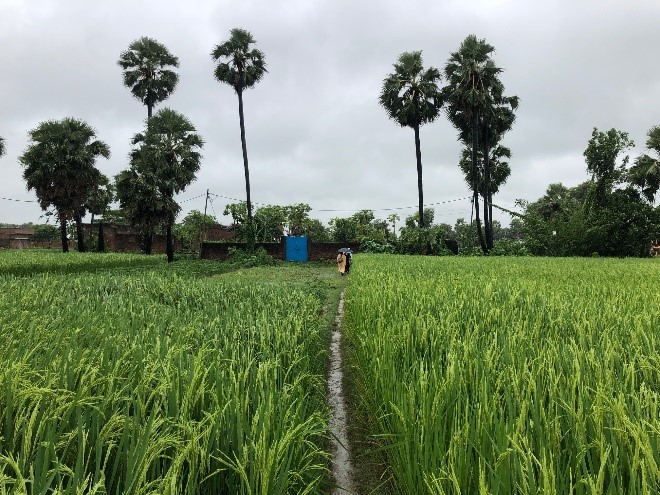 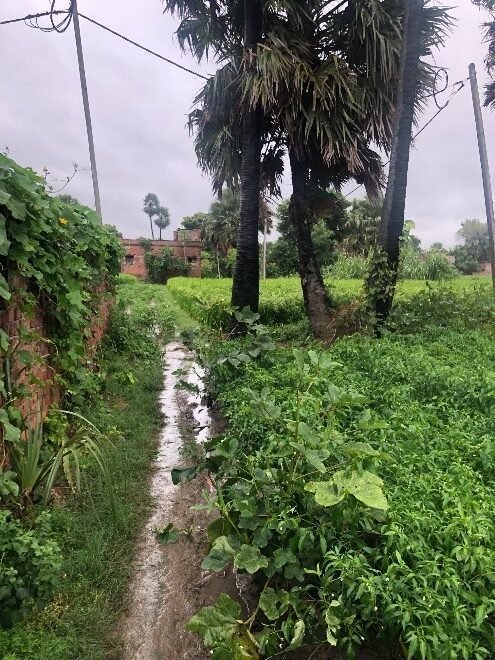 Confused – We know but we don’t know. On an overcast day checkered with light drizzle, we spent time interacting with women groups formed as part of Pratham’s work with Shiksha Sevaks or through our work with JEEViKA (Govt of Bihar initiative to setup women Self Help Groups). While some of the women were mothers of children who we were working with, others had older children or were grandmothers.

None the less all of them were part of pre-existing groups of women who would regularly interact with one another. Our conversations mainly revolved around how mother’s have been enabling their children’s learning at home. Across the groups all of them said that most of their children had lost some ability of what they knew previously, usually answering this question while propping up a young child to prove their point (however the child was just trying to play or nap in her mother’s lap). On further inquiry, they said that in the absence of schools, local tuition was the next best thing, at least some (supposed) learning was happening. They shared how SMS/ WhatsApp messages being shared by the Shiksha sevaks/ Volunteers and Pratham helped their children do some daily learning activity, but they were dependent on regular access to a device. Usually, the device was with the husband who could only share it in the morning or evening. On being pushed on what they could do to improve the learning situation? Few had suggestions such as ensuring daily review of studies at home, interacting with the schoolteacher, and ensuring their child goes to school regularly, albeit acknowledging that they themselves may not support learning directly. Others quietly listened and nodded in agreement or disagreement whenever a question was asked. However, the group’s energy and engagement levels peaked when a mental math puzzle was shared with them in which they had to break down Rs 100 using exactly 10 notes or coins without using a Rs 10 note or coin. Lots of discussion ensued and, in some cases, loud arguments and faint giggles in the background were heard. After some back and forth and some breaking down of steps, everyone got the answer and seemed extremely satisfied. While being careful not to generalize, across all the groups we met, it felt that school closure of over 500 days did not seem to have a profound impact on their perspectives and concerns regarding learning. This got me and the group puzzled – perhaps there was always low expectations or a lack of confidence/ awareness on how to question the school.

Frustrated – the system is trying, but is it enough? During this whirlwind trip, we had the opportunity to interact with multiple high-level government officials related to education. For one of the visits, our troop even had to hail down multiple shared auto rickshaws to huddle into one as our car broke down on the highway on our way to meet a Govt official! On interaction with officials, to our contentment it was clear that they also acknowledged that we are in a learning crisis. School closures for such a long period of time has had adverse effects on learning and remote learning has not really plugged any gap. So, this begs the question, what to do next? What can address this issue? We went in with a clear agenda to these meetings – to share on ground realities, showcase what we are doing and propose a plan of action. While the government officials shared many very relevant challenges and discussed what their broad plan was, it seemed to revert to the pre-pandemic days. It reflected top level concepts and goals which are theoretically comprehensive but will be strewn with implementation challenges on ground. Hence, in specific districts, we requested the government to put in motion a simple system-driven plan to first address the basic literacy and numeracy challenges of children who were previously in school but have lost out on 1.5 years of learning. To this there was acceptance and a commitment to support. While preparation has begun in earnest, only time will tell, if this too remains a good-looking document or translates into achieving simple goals on the ground.
In a very short time, after a very long time, I managed to experience a range of emotions. The trip has given me enough reasons to believe in what I am doing and what I am part of, helped me articulate many tough questions which we still need to find answers to and renewed hope that the cast of characters I work with at Pratham, in the community and in the government – all with their varied perspectives and experiences can work towards a common goal. 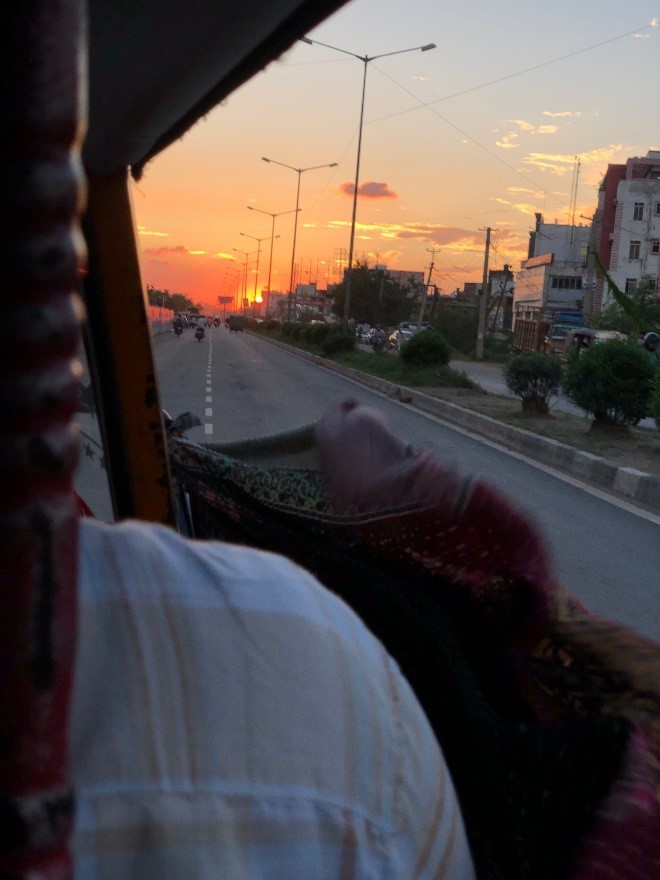 Any views and opinions represented in this blog are personal and belong solely to the author and do not represent Pratham Education Foundation, unless explicitly stated.