Last afternoon was a disaster. The heavy traffic which we encountered leaving Kolkata, continues right through our journey. Even the highway is choked, caused by the traffic lights that have been erected.  This 8-lane highway was constructed to ease long distance travel and follows a path away from the many small towns that sprang up along the mighty Ganges, a flourishing maritime trade route since medieval times, that has footprints of the Portuguese, French, German, Danes, Dutch and of course the British! This relatively new highway is the gateway to the North of the country and has replaced the famed Grand Trunk (GT) Road, said to have been constructed by the Afghan ruler, Sher Shah Suri, that went right up to Peshawar, touching all major North Indian cities. An ever-increasing population, and lack of earning opportunities have forced an extension of these small towns right upto the new highway and has necessitated the creation of cross-traffic corridors. Our planners, not known for their foresight, really should have constructed flyovers over these spots. The large potholes created by the rains, at these junctions does not help matters.

We were on our way from our Kolkata office to Siuri the district headquarters of district Birbhum in West Bengal. We have done this stretch in 4 hours many times. We hoped to reach Sriniketan Block, 35 kms before Siuri, by 4 in the afternoon, well in time to see our volunteer led evening classes.

The road to Siuri breaks off from the national highway just before Barddhaman. Coming from Kolkata we make a right U-turn into the service lane and turn left to reach the mouth of 2-lane state highway, which was in a fairly good condition. No potholes on these roads.

We have travelled about 120 kms from our office and it has taken us almost 3 and a half hours, much more than our usual 2 hours. From this point on we were hoping to reach Sriniketan Block in one hour or so. This road, though very busy, has a flowing traffic, but overtaking is not possible if another vehicle comes from the opposite end. One only slows down when passing through a village. There are a few.

Alas, our bad luck continued. The traffic from opposite end was sparse for a few kms, mainly cars with an occasional cargo laden truck, till we reached a railway crossing. This rail track connects Kolkata to North India and is very busy. The rail gate must have been closed for a while because there were a number of vehicles in front of us. Traffic was allowed to move after a 20 – minute wait, but the chaos created at the mouth of the rail gate by cars coming from the wrong side, and multitude of 2-wheelers on either side vying to cross the rail gate first led to a huge traffic snarl. After 30 minutes of intense manoeuvring our driver managed to cross the rail gate.

After crossing the railway tracks, we saw what the main problem was. It was the enormous number of cargo laden trucks and trailers which was the cause of this snarl! The entire traffic from North Bengal had been diverted from the main highway to this narrow state highway. We crawled past hundreds of trucks who had blocked one side of the road. In effect what had happened was a 2-way traffic of cars, buses, 2-wheelers, and an occasional tractor, was moving on just one lane. Cyclists, pedestrians and animals also staked their claim to be part of this mess!

It takes us almost 2 hours to leave this chaos behind.  We were way behind schedule. Not much distance was covered in those 2 hours. Visiting our volunteer led classes in Sriniketan was definitely not possible this afternoon.

The golden glow of a mellow setting autumnal sun over the lush green paddy looked spectacular! At this time of the year most parts of rural West Bengal hold the same spectacle. We soon crossed river Ajoy. Early autumn is also the time when Saccharum Spontaneum or Kans grass, Kash in Bangla are in full bloom. The distinctive dense white bloom, flanking the banks of Ajoy had also turned golden! The effects of the setting sun. 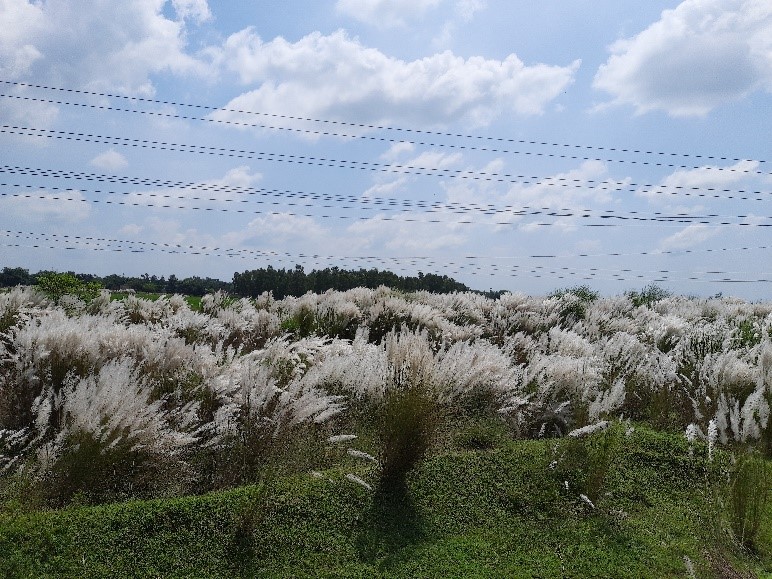 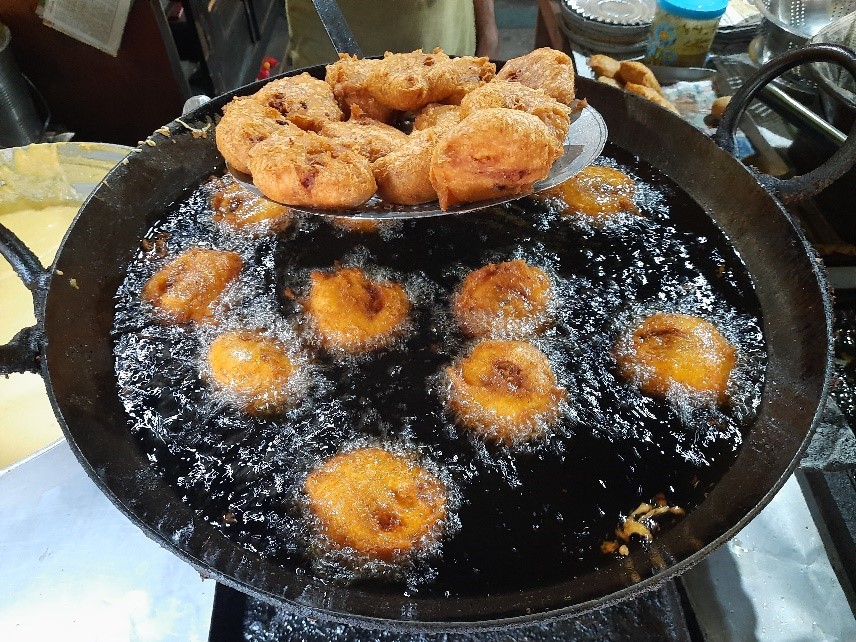 We reached Siuri just before 7 pm.

Today, our schedule will be tight. We will visit as many Pratham volunteer led classes as possible in the morning, in the villages Sriniketan block. Sriniketan adjoins the famous Vishwabharati University in Shantiniketan set up by the Nobel Laureate Rabindranath Tagore. In the afternoon, it will be to witness the Self Help Group mother run classes mobilized by Liver Foundation, in Nagari block.

Siuri is situated to the north of Shantiniketan. The 35 kms distance between the 2 towns is about an hour’s drive. Mahaprasad one of Pratham’s block leaders in West Bengal, who has recently been moved to Nagari block to supervise our partnership programme with Liver Foundation in a cluster of 23 villages, meets us at the guest house where we had spent the night. We are soon on our way to collect one of our Cluster leaders of Sriniketan, Basudeb who would be our guide this morning, from Shantiniketan.

We reach Shantiniketan at 7:30 pm and stop at a popular roadside shack to eat breakfast. A type of potato fritters and puffed rice is a popular snacks in these parts. Basudeb soon joins us, and we eat just the fritters and drink black tea. This should sustain us at least till lunch time. Breakfast for 5 of us was just Rs 75 (about one USD)! Rural Bengal is still very reasonable.

Lohagorh village is the first village we visit. It is one of the 25 cluster of villages in Sriniketan block where Pratham implements its volunteer based Hamara Gaon programme. Covid19 has made us alter our strategy. Since the beginning of August this year we have started 2 programmes, ‘Readiness’ directed at children in Grades 1 and 2 and ’Catch-up’ for Grade 3 and above. 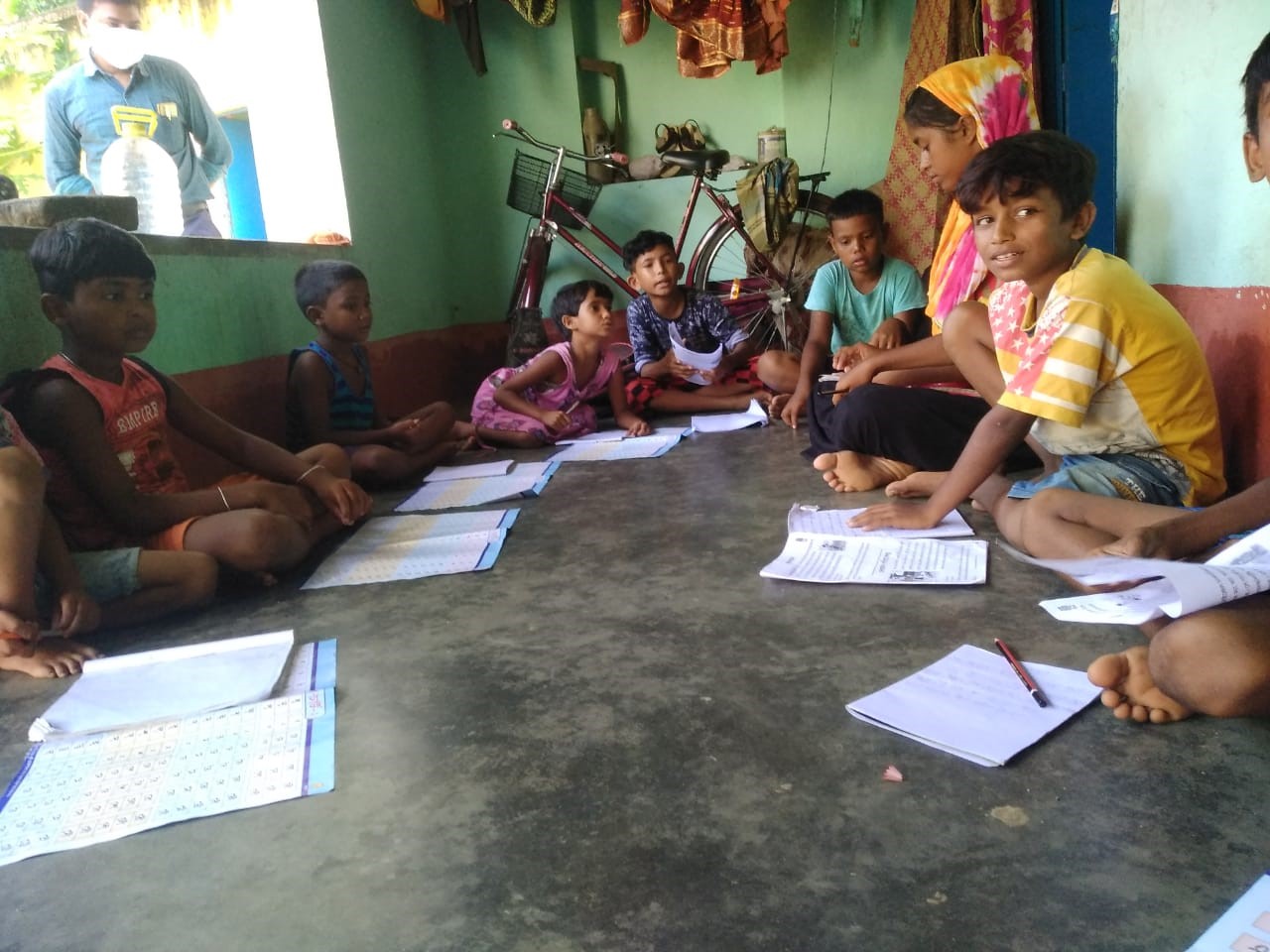 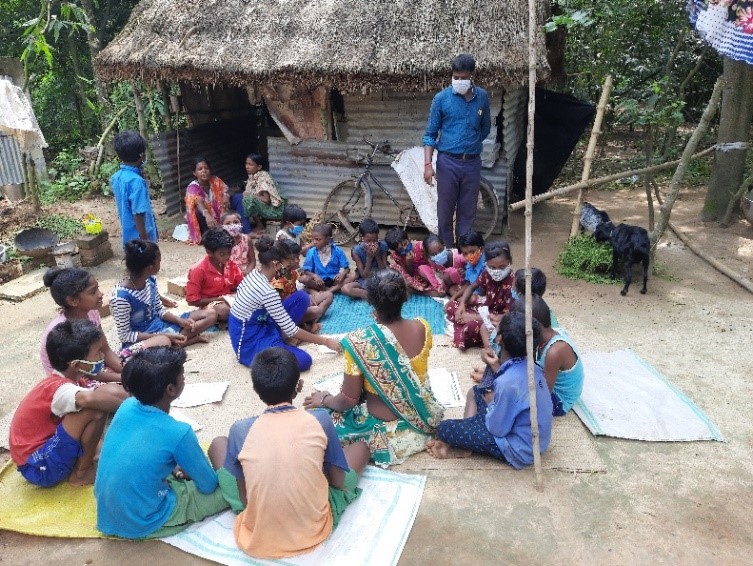 ‘Catch-up’ has a reading and a mathematics component. Each day an hour-long class is held in the community by a Pratham volunteer. Due to Covid-19 we also try to ensure that the class size remains small and hold multiple classes in a village. Some in the morning and some in the evening.

About 8 children ranging from Std 1 to 4 are present in volunteer Nasima Khatun’s class. 4 of them in Std 1 & 2 and 4 in Std 3 & 4. The Std 3 & 4 children have just started the reading component of the ‘Catch-up’ package after a month-long mathematics classes. None of the younger children can read! The children enrolled in Std 1 and 2 have never attended school due to Covid19. The ones in Std 3 and 4 can just about read. These physical volunteer led classes have started after a break of almost 15 months, Nasima Khatun who has been trained virtually to administer the ‘Readiness’ and ‘Catch-up packages is yet to come to terms on how to deal with the situation. Our Cluster leaders will have to provide her more classroom support in the days to come.

We are, however, extremely surprised at the interest the books have generated amongst the younger children! Though they cannot yet read, they seem absolutely mesmerized by the books and hardly pay us any attention.

Dakshin Harirampur is a tribal majority village, where most villagers work as labourers. Menoka Murmu, though an old Pratham volunteer, is a replacement teacher for the time being for Sumitra Murmu. She is handling a diverse range of children from Std 1 to 8 well. But, when we start communicating with the children directly, she actually has to translate our words in Alchiki – a tribal language spoken in these parts, to particularly the younger children. 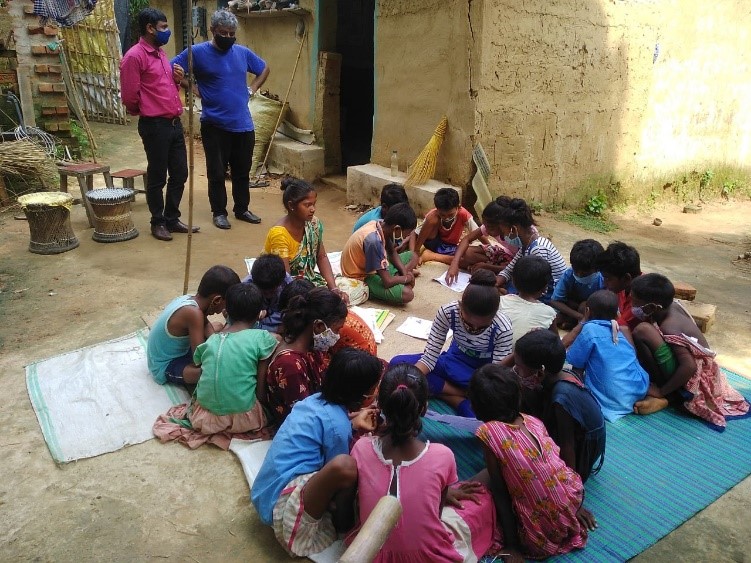 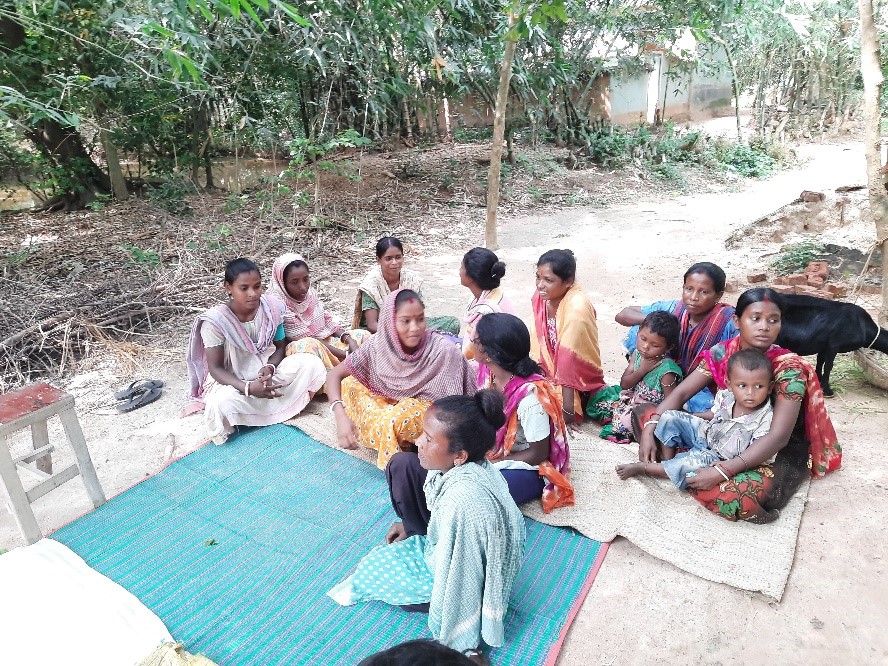 The children then answer us in Bangla! The older children in this group were more or less fluent readers of Bangla. Basudeb and Mahaprasad reorganize the group of 21 into 4 groups, with at least one fluent reader in each group.

We also meet a mother’s group in Dakshin Harirampur. Most work as daily wage labourers. We try quizzing them on their thoughts on education, particularly in these troubled times.

They hardly spoke at first, only nodding their head. It takes just one mother to break the shackles, then all of them get engaged in animated conversation. They are worried about their children’s education; some even sent their children to private tuition during the lockdown when our community classes were not running. They want the schools to reopen soon.

Benuria village is the last village we manage this morning. Volunteer Sucharita only has 8 children in her class. All girls from Std 3 to 6.

While the two Std 6 children could read Bangla story fluently. The rest could not. The Std 3 & 4 children were still at word level. The ‘Catch-up’ reading component has just started here, hopefully in a month’s time all 8 will be able to read fluently.

The schools in Bengal will perhaps open after Diwali. These children must be equipped to at least follow what is happening in the class. Clearly the children in Std 1 to 4 are the worst hit! Our team is trying their best to get these children into shape. 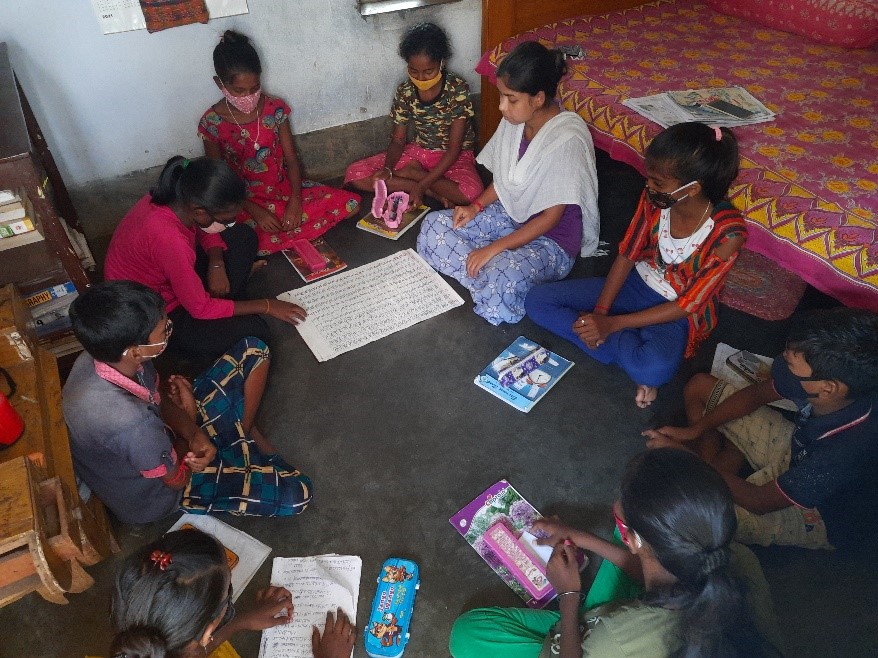